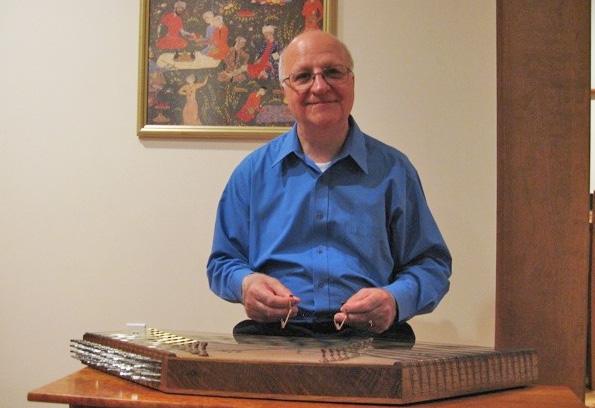 Bio: Dariush Saghafi began the study of santur at the age of 11 with Ostad Abolhassan Saba, the foremost contemporary figure in Persian music.  He also spent a year of study with Ostad Faramarz Payvar, the distinguished Iranian santur player and master musician.  Saghafi was twice the winner (1966 and 1967) of the Gold Medal award in santur competitions among students from all Iranian colleges and universities.  From 1961 to 1967, he taught santur at the Tabriz Institute of Fine Arts.

A highly respected musician and interpreter whose santur playing and style reflect the traditional excellence of the master players of the instrument, his performances in Iran have included concerts in Tehran and Tabriz, both as soloist and in various ensembles.  In the United States, he has performed to rave reviews at New York University, Carnegie’s Weill Recital Hall in New York, the Kennedy Center in Washington, D.C., as well as numerous concerts in the Pittsburgh area. Darius Saghafi is the recipient of the Pennsylvania Council on the Arts (PCA) 2008 Fellowships in Traditional Arts.

For the past 45 years, Saghafi has been engaged in the study and research of Persian music and poetry, learning from personal contacts, recordings and writings of the old and new masters.  He believes that the performer must know in depth every aspect of the theory and practice of his art; that his knowledge and beauty of the music elevates and purifies the spirit; and that the feelings inspired by the music can be communicated to listeners who will appreciate the music with or without a thorough understanding of the art form.  He believes that the musician must accomplish two things: first, appeal to a general audience, and then satisfy the demanding standard of the masters.
​
On January 24, 2002, Dariush Saghafi joined Cuarteto Laninoamericano in the premier of Calligraphy No. 4 for santur and string quartet by Reza Vali.  This work written for and dedicated to Dariush Saghafi and Cuarteto Lantioamericano, was released in CD format in 2006. In 2003, the Art Institute of Tehran, Iran, invited Saghafi to lecture on santur and on the school of santur performance according to the teachings of Ostad Saba.  Subsequently, in 2005, the Institute commissioned and released an educational compact disc with Dariush Saghafi performing on the santur, demonstrating performance on the santur as taught by Ostad Saba.  In 2004, Saghafi joined Pandit Bhajan Sopori, a master of Indian santur, in a concert performance at the Kresge Recital Hall, Carnegie Mellon University in Pittsburgh.  The live recording of this concert is available on DVD format. In 2008, Dariush Saghafi performed in Masters of Azari and Persian Music in Pittsburgh. In 2009, Daiush Saghafi lectured on Persian music at Duquesne University in Pittsburgh, at Queens Museum of Art in New York City and in An Evening of Persian Classical Music in Pittsburgh. In 2010, Dariush Saghafi performed at Carnegie Mellon University College of Fine Arts in Pittsburgh.  This performance followed the introduction of the Arghanoon, an electronic instrument created by Reza Vali.